The study of my Family Tree

There’s always been this mystery as to why my great grandparents were separated. I mean, it had to have been something pretty bad for a woman to kick her husband out of the house back in the early 1900’s.  But for all my digging, I could never find anything that gave me a clue as to what the circumstances were in their marriage that such drastic measures were needed to be taken.

Then last week my cousin sent me a box containing an old purse (old enough that it might have belonged to my great-grandmother Amalia.) Inside the purse were a bunch of old newspaper clippings in German. Amalia, my great-grandmother, was born in Slovakia, but she married John Kranz who was born in Germany.  The article I found in the purse was probably from a German newspaper published in Brooklyn, NY circa 1915.

Here is what my translation produced.  Thank you Google Translate 🙂

An extremely sad girl from married life yesterday appeared before Judge Kelln in the Supreme Court, when Mrs. Amelia Kranz brought a lawsuit to break up her marital union with the blacksmith John Kranz of No. 355 Stagg Str. The man is a dog of over 200 pounds bodyweight, the complainant, who weighs about 90-100 pounds, looks sickly and weak. The contrast was particularly acute when the poor mistress said in a thin voice that this brutal giant had terrorized and maltreated her for years. For weeks her face and lips would have been swollen by the constant blows of his fist. Often he would issue death threats against them, and those mitigations and threats would only have had the effect of extracting from the woman a few hundred dollars that she had saved during her marriage.

For the sake of her four children, aged from three to fourteen, Mrs. Kranz went on, she would have endured that torment for years, but now she could undermine her health and she had reached the end of her strength. In his defense, Kranz also condemns his wife for cruelty, claiming among other things that she had not given him sufficient food which stood in the sharpest contrast to his blooming, well-groomed appearance. The judge stated that he could not admit, under the circumstances, that the woman should take the legal costs of her small savings, and awarded her $30 lawyer’s fees. As Alimentation payment, Kranz has the option between $40 per month or home rental payment and $6 (The last few words were cut off.) 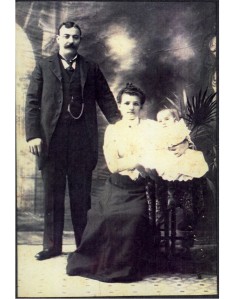 This is John and Amalia Kranz. He looks like a large guy, but I’m not sure I’d call him a giant. I don’t suppose we’ll ever really know the truth, but this certainly sheds an interesting light on what their home life may have been like. When I sent this translation to my cousin I told her that genealogy is, in many ways, the search for truth, and often times that truth isn’t as pretty as we might like it to be. But I’d rather know the truth of my ancestors. I’d rather know that my great-grandmother had the courage to stand up for herself and her children. She was obviously a very brave woman.